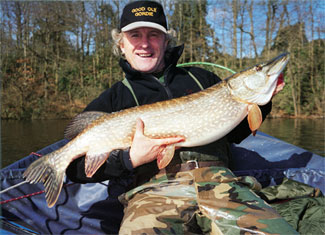 This is a very exciting form of lure fishing for pike, simply because you see the lure taken by the fish, often in explosive style! To see a biggie hammer into a surface lure is heart stopping, for sure.

Summertime and into early autumn, are the best time of the year to go topwater, simply because the weather is warm and the pike are at their most aggressive. Pike are often seen striking at surface moving prey, waterfowl, frogs, in fact any water dwelling creature that has the misfortune to pass overhead. Always look for clear water, with some kind of cover nearby to work over with this method. Weed beds such as cabbage patch, broad-leaved potamogeton and reed stands are places to seek out. On the Irish Loughs and Scottish Loch's I fish, I target rocks!

Dead flat calms are a condition I'm not particularly keen to fish in, even with this approach, a little ripple is preferred, a correctly worked lure has still triggered strikes during some pretty wavy water. There are so many surface lures available to use from stick baits like the Jackpot and Top Doctor, which work in a "walk the dog" zigzag manner on the surface. Prop baits like the Super Stinger, Woodchopper and Splutterbug that can cause disturbance if fished in a stop-start or ripping style, their propellers causing fry simulating spray. Creepers and gurglers like the Crazy Crawler and Jitterbug and the far more durable Smity Scuttlebug and Slammer Creepin Tom are supper catchers of pike. Big lures such as the Awaker, Thunderhead, Skitter Critter, Slap Tail, Wobblin Scud and Locomotive are amongst the many true surface lures I like.

Large Gator or similar broad spoons can be used as top water tempters by retrieving them across the surface in a deadly side to side skimming manner I call "show boating"! In some water conditions it is possible to stalk the fish and this adds to the excitement of the method being able to cast directly to a mean-eyed fin twitching fish. There are many tricks to try in order to trigger a strike, cast to a likely looking spot and allowing the lure to settle for just a second or two, then, giving it a few twitches, pause again before beginning to retrieve, this is just in case the lure has landed very close to a fish, many times this has brought instant jaws-snapping action. 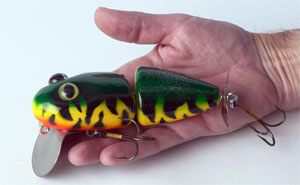 Some of the sightings I've had, have made my hair bristle! Big pike hurling themselves skywards when they've hit my lure, right next to the boat. A big fish following the lure "hunting" down its prey, can be seen as it pushes water and a bulge in the surface is clearly visible.

Stop, start, twitch, jerk or continually reeling the lure back in will all bring up pike. Just keep experimenting with retrieves, even taking several minutes to reel a lure in. The fish may just smash onto the lure, if not try a sudden stop start trick this can bring about the take. Sometimes I will slow my retrieve to an almost standstill and ensure that the lure doesn't ripple the surface and by doing this you'll often see a green shadow of a following fish in the calm spot just behind the lure, then suddenly surging the lure forward can provoke the fish. 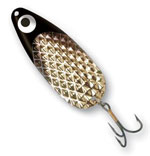 On rare occasions a pike has taken a plug that hasn't been activated for a few minutes, only surface skim making the lure move. Don't worry either about fast retrieves, you can't reel too fast, I've got video footage of a pike taking a plug off the top being reeled in as fast as I could wind. There is one thing you will learn when fishing topwater lures and that is that the pike can be very bad shots, when it comes to connecting on the strike, many is the time I've had a dozen or more fish rear up to chomp my baits and only three or four have gobbled it. Mind you big ones don't miss too often. Frustrating it can be but hair-raisingly exciting just the same. So go for it!