Confidence with Lures by Mick Brown 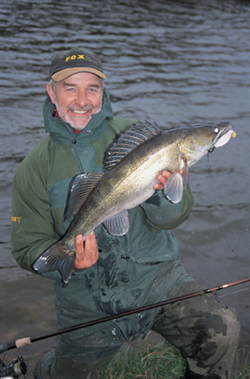 As a professional pike angling guide, I expected most of my business to be in the wintertime. More and more though, I am receiving requests for spring and summer pike sessions with lures. Very often from quite experienced anglers that have had some success with live and deadbaits but cannot get to grips with lures. In short, they lack confidence with them.

Should this be the case, I usually take them on a confidence building session and get them to catch in ways that they have found difficult in the past. We usually fish quite shallow water, often densely weeded and covered in floating debris typical of that time of year. I suspect that their confidence, at first, drops a little further as they ponder how they might even fish in such conditions. At the end of the session, I normally have another lure fishing convert who realises that there are techniques and lures available to tackle the most daunting conditions.

Choice of lure is important, of course, but before this, it is vital to locate pike and understand when they will feed in the prevailing conditions. Lure fish in the wrong place at the wrong time and you will remain disillusioned.

Space forbids me from discussing this most important point. All I will say here is that you should experiment thoroughly on your local waters and realise that there is a pattern to the pikes feeding habit for a given period and it can be easily worked out with a little effort. For example, on my local river, in the drought conditions that prevail as I write, the last half hour of daylight and into darkness produces takes galore although nothing much has happened during daytime. I have it all to myself because everyone else has gone home! 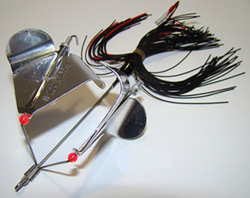 It's also important to have a strategy when lure fishing; it's not a good idea to keep clipping on a different pattern to see what happens. When after pike in the warmer months of the year, my normal tactic is to start on the surface and work deeper and deeper until I get a response. If nothing happens during this process while using lures that I have great confidence in, I move to another swim.

On the surface, I have 100% confidence in the famous Arbogast 4" Jointed Jitterbug. After a day with me, most of my customers are rushing out to get their own for it can be so devastatingly successful.

Although they don't cast as well as other surface baits, buzz-baits are extremely successful on the surface too. Again, this is a bait that most of my clients do not think will work. Over the last two summers I have been putting buzz-baits through their paces and cannot praise them highly enough. With this type of lure, good design and construction is vital to prevent them snagging up and to keep the blades working through surface scum and these lures pass with flying colours. Look out for the twin bladed Bagley Chatter Buzz with its twin blades. Work them with the rod held high to keep them on the surface and just fast enough to get the blades working. Then wait for the heart stopping explosion as a pike comes in for the kill in a manner resembling an approaching torpedo!

The buzz-baits can be allowed to sink and work beneath the surface with quite good results but for better results I would recommend doing the job properly and using the purpose designed spinnerbaits. They look like nothing in nature, and yet the pike still find them irresistible. I am continually amazed when pike anglers tell me they have not caught on spinnerbaits. I find it difficult to see how you can't catch on them! They must rate as one of the most versatile pike lures ever! Being virtually weedless they can be fished where many other lures would keep snagging up. Again, I'm rather biased towards Hart spinnerbaits but that is simply because I have caught so many pike and perch on them. The Hart 'Throb' single and tandem patterns have become regulars in my tackle box as will the 'Thumper' with its combi blade design that creates an irregular pulsing action to its blade. I particularly recommend the Black & Chartreuse colour skirt combination for clear waters that I like to fish. The throbbing blades are very well designed and this has led to them being very effective in coloured waters too.

Once I have converted my customers to lure fishing, I try them with something that will forever keep them open minded. I clip on a large surface Musky bait and ask them to spend a while throwing it around. Very often they are amazed when a pike comes up for it, often no more than five pounds or so. It's important to be able to give pike a range of potential targets for there are times when pike of any size will prefer a large food item. There's no need to go to Canada or Sweden to use these big surface lures, or the other diving versions, because our own native pike will take them too. It really is exciting to see a pike of any size make a savage surface attack on one. My favourite in the Smity range is the No 6 'Slap Tail' with its enticing rear blade that is just asking to be mauled.

Every now and again, a lure appears in my tackle box that I seem to be using over and over again and, simply because it's so successful, my hand keeps reaching for it. Falling into this category over recent seasons has been the Rapala minnow spoon and in particular the fire tiger pattern. Its one of those lures that will work anywhere and has produced terrific numbers of pike, perch, and chub recently plus a few trout and zander! Only recently I took a forty three inch long pike on it. Next cast a pound perch. It's that sort of lure where you don't know what to expect next.

And yes I did mention chub on lures and I'm not talking about the odd one or two. I've recently finished compiling a lure fishing book for Rapala, I have done my utmost to show anglers what they are missing by neglecting lure fishing. While compiling the book I became interested in catching some stillwater chub which I knew lived in a lake I had fished for pike. To cut a long story short I succeeded in catching probably one of the biggest lure-caught chub hauls ever made. Six sessions produced one hundred and twenty one chub mostly in the three to five pound range!

The little Rapala minnow spoon proved an excellent choice when fished shallow as did the Kuusamo Rasanen. While on the subject of chub, I will mention here that I dropped a lot of fish off due to light hook holds in their soft mouths. After fitting 'Excalibur' rotating trebles to some lures the problem was much less noticeable.

One thing I try and impress on my customers is the importance of getting good information from the outset instead of struggling on alone. I've recently taken my own advice and bought copies of In-Fisherman's excellent pike and Musky "lure fishing" DVDs which would have saved me months of heartache if I'd seen them earlier! I think the moral of this short piece is by now pretty obvious. Buy only quality products and obtain advice from someone who knows what they are talking about. I know that Andy's vast knowledge and friendly manner will be the best starting point that you can get. Give him a call now!