Bass on Plugs by Steve Butler and Mike Hughes

"Steve Butler and Mike Hughes are two of the best Bass lure anglers in Wales. They have had tremendous numbers of lure caught Bass, up to 10lb, and other species such as Pollock, Coalfish, Codling, Mackerel, Wrasse, Garfish, Gurnard and Sea Trout in their pursuit.

Last year they pioneered the use of surface poppers for Bass, catching 85% of the total lure caught Bass by all fellow members of the B.A.S.S. (Bass Anglers Sport Fishing Society). What follows is the result of years of experience of fishing in the right place, at the right time, and with the right lure. This will help new and even experienced lure fishers, in their pursuit of this sporting species."

Location - Fishing in the right place
Our choice of venue for plug fishing is rocky or boulder strewn ground covered with thick weed or kelp, in the vicinity of a river or stream estuary. The simple reason for this is the amount of food available in these places is greater than in any other. The fact that these places deter gill netting by commercial fisherman and pressure from the average sea angler is a bonus. 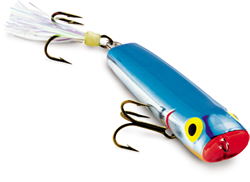 Generally speaking these area's are shallow and at high tide there may only be two or three feet of water covering them, sometimes less, but Bass will forage over this and into rock gullies which shelter small prey fish, prawns and crabs. Deeper gullies between outcrops of higher rocks are a bonus and somewhat easier to fish since they channel both fish and food into a smaller well defined area.

Bass will run up estuaries with the tide often in big shoals of "schoolies" these small Bass of 1lb to 3lbs can be good fun on light tackle, the bigger fish seek out quieter undisturbed rocky area's except when they run up the estuaries to spawn in May.

Time, tide and weather
Bass are a warm water fish and although the season extends from May to November the best months for lure fishing are August, September and October. By August "white bait", a general term for the fry of most inshore shoaling species, are abundant and congregate in large shoals close to the cover of rocky areas. These are preyed upon by smaller predators such as Mackerel, Launce (large sand eels), and small Pollock etc, which in turn attract big Bass.

The best time of day is undoubtedly early morning from first light until breakfast time and the last couple of hours of daylight into darkness. Sea conditions are best if it's flat calm, no wind makes casting easier and lures especially surface baits are seen and targeted more easily by the Bass. Often you can't avoid a sea breeze, an offshore one helps casting while an onshore one requires heavier plugs and faster retrieves to keep in contact with the bait and avoid any slack line. The state of the tide is very important so tide tables for your local area are essential. Different venues fish better at different states of the tide, it's impossible to be dogmatic, only experience will tell you when it's best for your local venue, but low water at the turn of the tide, coinciding with first light and for a period of two or three hours is a good starting point.

Some places may fish better at the top of the tide, the flood water giving sufficient depth to encourage the Bass to explore the freshly covered rocks. A sketch pad for noting prominent features at low water is very useful, a rock or large boulder, exposed at low tide, could be 2 feet under water at high tide, providing a focal point for Bass to forage around. These places can be hot spots which produce fish time and time again. Gullies which fill with the rising tide are obvious holding places, and are always worth a few casts.

Choice of lure tackle and technique
For fishing over and around rocks, one family of lures stands out as being the most effective - floating shallow diving plugs jointed or single piece models, 5" (13cm) long. The emphasis is on shallow diving, anything diving deeper than 4' is going to be expensive in shallow, weedy, rocky water, indeed those that dive between 1' and 2' are the most productive when fished around weed covered rocks and through kelp strewn gullies and if you know your ground well, allowed to rise to the surface to avoid obvious snags.

In more open water vary your retrieve, wind in short bursts then slow down adding jerks and twitches simulating bait fish which act in this manner - darting about for their food or being knocked about in a swell, occasionally diving for cover to avoid predators. Allow a very shallow diver to break surface occasionally which bait fish do, especially when being pursued, (even by your plug!) which will help attract the Bass.

Surface poppers are also successful in these same areas, action must be imparted into these lures - jerks, twitches, plops and pauses are attractive to foraging Bass which are opportunists always on the look out for an easy meal. 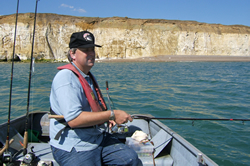 Lure colour is a matter of personal choice, but it seems logical to use "natural" colours to imitate the local food fish, Mackerel patterns are obvious but also try black back with silver or white belly as a good white bait imitation. Sea water isn't kind to hooks and unless they are specially coated will rust after a couple of trips so replacements should always be carried. Plugs weighing between 1/2oz & 1oz are ideal, giving you the option to cast long distant or cope with head winds, incidentally the splash of a big plug can draw the attention of cruising fish rather than disturb them, even in calm conditions. Fortunately it's not always necessary to cast a long way; Bass will come in very close at times.

As for tackle an 11' x 2lb Test Curve Carp rod, paired with a quality fixed spool reel, loaded with 10lb line and a Lindy clip at the business end completes the outfit.

Clothing and other essentials
Chest waders or at least wellies and water proof over trousers saves a possible soaking if an onshore breeze or a swell develops. They also allow for minor wading, if necessary, and allow for the tide creeping up on you whilst concentrating on fishing. A "shortie" wading fly waistcoat with its many pockets carries all the bits and pieces. A folding Trout net, 20" - 24" diameter can be hooked on the back of the waistcoat out of the way when walking and casting, is perfect and always to hand when needed.

A word about safety
Walking on slippery rocks can be very dangerous, try to avoid anything that looks green i.e. algae or light weed. A wading staff made of wood so that it floats and is disposable is nigh essential in some places, you can test the depth as the tide floods and also probe for hidden rock pools when negotiating rocky areas. A cheap one can be made from a broom handle with a looped cord to fit over the wrist which can be tied to a wader strap or somewhere on your waistcoat when not in use, enabling both hands to be free. In the final analysis if its too rough avoid rocky areas and fish estuaries which are safer.