Its a rare opportunity to be able to create a fishery from scratch but thats exactly what actor and rock legend Roger Daltry did back in the 1980s.

From that original concept Lakedown has matured into the beautiful fishery we find today. There are four spring-fed lakes totalling approximately 26 acres, each of these lakes are large enough to be considered a fishery in its own right with its own character and charm, the waters have a diverse fly life appealing to those who prefer a more imitative approach with hatches of Alder, Damsel, Sedge, Mayfly, Buzzer and Olives along with Corixa and Freshwater Shrimp.

When visiting this fishery make sure you have a good selection of weighted nymphs as your approach is most likely to be a floating line coupled with a long 15 fluorocarbon leader. Effective flies such as Montanas, Damsels, Dancers, Tadpoles in various colours, take a selection of Bloodworm and Buzzer patterns as well as a small selection of dries including Mayfly, Sedge and small Parachute style Klinkhammers again in a variety of colours.

My visit at the end of April saw the first warm weather in weeks; in fact the cold early season water temperatures had hardly risen above 10 degrees so hatches were sparse. While I waited for my companion, Richard Pop Larkin, I chatted with Ted Cocklin the fishery bailiff, as we chatted several fish were caught from the dam on the top lake by members of the Reigate fly club.

A variety of weighted flies were accounting for the fish, conditions were unusually perfect, overcast calm and mild, at last! Fish could be seen rising occasionally all over the lake, I couldnt wait to get started.

Richard and I started on Lake 2 as the first lake was now busy, I started on the dam facing the full force of the wind that had sprung up, and was quickly clearing the low cloud cover that greeted me on my arrival earlier this morning, I angled my first cast slightly across the wind allowing my fly to drift under an overhanging tree, I slowly retrieved my line having counted my weighted fly down allowing it to get close to the bottom, as my fly swung towards the tree and approached the face of the dam the line tightened, fish on!

The wind strengthened making further action in this spot very difficult so I moved to the far side of the lake across on the field side, this allowed me to cast across the strengthening wind, after several casts I moved again this time further down wind into the long finger bay which was channelling the wind past me and carrying any food that might be hatching down into the back of the bay, a couple of casts from an awkward position behind a barbed wire fence put my fly against the far bank in a very fishy looking area, all this effort was rewarded with a plump brownie of about 2lb. A quick couple of pictures and I was fishing again but this time from the far end of the arm casting straight back into the wind, this was easier than the previous spot it also put my fly right in the deep channel where another hard fighting rainbow engulfed my gold headed black and green tadpole fly. 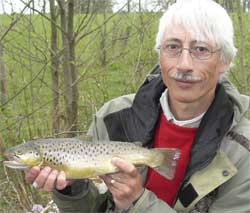 I found Richard to see how he was faring, hed positioned himself on a point halfway down the bank on lake 3, this spot commanded a large area and gave him the opportunity to cover fish while utilising the wind which was coming from his left to right, perfect if youre a right handed caster which Richard is, despite this hed not connected with any fish although hed missed two takes and had a couple of follows but as this was his first trip of the season he could be excused for being a bit rusty.

We both tried several other casting positions on lake 3 but to no avail, the bright sunlight and a strong breeze had defiantly turned the fish off, we moved to lake 4 trying several spots then back to lake 3 before returning to lake 2 again, we managed to fish for another 5 hours without a take between us despite our best efforts!

It must have been 4.30 before another fish obliged, I was casting backwards across the wind, by facing the bank and letting my back cast effectively become my forward cast I was able to cast across the strong breeze that was coming into my right hand side this makes casting as a right handed angler both difficult and dangerous, I was in the right hand in corner of the dam by the old lodge my fly was now an un-weighted black UV nymph fished on a floating line, Id chosen an un-weighted fly so I could just let the wind carry it toward the dam whilst it slowly sunk through the water column. Two fish in quick succession encouraged me, I swapped positions with Richard for 20 minutes in an effort to get him into some action unfortunately it just wasnt happening for him so he kindly let me have another try, two more fish on the same method just proved how subtle the presentation had to be, these fish were not feeding but I imagine my fly was just too tempting to resist as it slowly fell through the water.

Our last effort was on the top lake which was now quiet, in fact we were the last anglers left, finally Richards perseverance paid off, by now hed changed to an intermediate line and was casting straight into the strong headwind from the dam, just as he hung his fly at the end of the retrieve a bright hard fighting rainbow grabbed his fly and sped off up the lake, one relieved and happy angler could go home having avoided the dreaded blank that looked on the cards for most of the day.

The fishing had been in two halves, the morning before the cloud cover disappeared was fairly easy but as it brightened the fish went off this was not just my experience as the other anglers all started roaming around, a sure sign that theyd stopped catching as well, the afternoon period was very difficult.

Flies generally do not hatch in direct sunlight so with the absence of hatching flies the fish went deep which is not unusual but their lack of interest towards anything Richard or I tried, suggested a complete lack of feeding activity possibly explained by the unseasonably cold water temperatures. I noted on reflection that all my fish came from casting positions that were fairly difficult under the conditions we experienced suggesting that these spots had been lightly fished if fished at all on this day.

I hope this example of our testing day gives you an insight into some tactics that could be employed when you next go fishing.

What can I say about Lakedown, on our trip the other anglers caught very well early when the conditions were more favourable which only goes to prove that there were plenty of good quality fish to be caught, Ive fished here many times and its one of my favourite small waters, its considerably larger than most small waters which gives the fish a chance to naturalise and develop an appetite for a natural diet providing testing fishing for the more discerning trout angler.